The fashion world was recently shaken by the unexpected news that Raf Simons, who has been Dior’s artistic director for the last three and a half years, has decided to step down and part ways with the historic French fashion house. To me personally this news came as slightly eerie and with uncanny timing, as only three days prior to Simons’s announcement I got the chance to see the movie ‘Dior & I’, which documents the designer’s arrival to Dior’s atelier in Paris and the putting together of his very first haute couture collection.

In the movie, director Frédéric Tcheng draws some compelling parallels between archival footage of Christian Dior in the late 1940s (accompanied by a voice-over reading excerpts taken from Dior’s own autobiography) and present scenes of Raf Simons, which I thought brilliantly mirrored Simons’s own focus as newly-appointed creative director to juxtapose Dior’s historic codes and classic “New Look” tailoring with his own twists of modernity and dynamism.

I want [the collection] to be dynamic, because I find women very dynamic.
–Raf Simons

Whether you personally like his designs or not (I know I do), Raf Simons’s time in Dior has certainly made an impact. He cast away the dark shadow of John Galliano’s scandalous layoff from the house (which had the potential to seriously damage the brand’s international image) and brought in a breath of fresh air thanks to his eye for modernity, bold colour combinations and clean lines, whilst at the same time keeping true to Dior’s confident and timelessly feminine aesthetic. “I think it is rather challenging to face a legacy which is so gigantic and is so sublime”, he comments in the film. It was also disclosed by Sydney Toledano, Dior’s current CEO, that the brand’s sales rose by a whopping 60% since 2011.

When you tell someone you’re going to work for Dior, that’s a lot of weight on your shoulders, because this house has so much DNA that it’ll be hard to find creative freedom. It scared us a little. I was scared a little.
–Pieter Mulier, Raf’s “right-hand man”, on joining Dior

Since taking up his role in April 2012, Simons has worked on an astounding 20 collections, and with each and every one he helped modernise and revitalise the house’s haute couture and ready-to-wear looks. I especially love the way he manages to incorporate some of his inspirations from outside of fashion directly into his designs – which really comes as no surprise once you learn that he started off as an industrial and furniture designer, has been an architecture scholar since his very early days in the industry, and owns his own private art collection which includes several pieces by Sterling Ruby, one of said inspirations right from his first Dior collection. 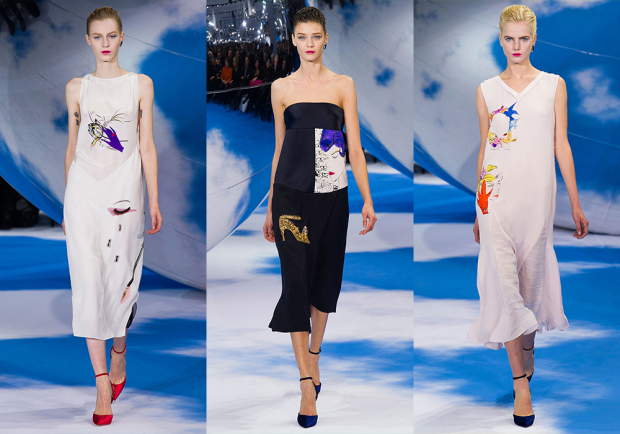 Raf’s announcement has placed a big question mark on Christian Dior’s future, as candidates for their next creative director are yet to be declared. In the meantime, the Belgian designer is planning to dedicate more time to other ongoing projects in his life, namely his own brand – which is understandable considering the insane amount of time and work a fashion house the likes of Dior requires: with no less than six shows per year, there is a lot of pressure on fast ideas and fast delivery. And, by his own admission, Raf is not one to work at his best in this kind of fast-paced environment: “I’m not the kind of person who likes to do things so fast. I think if I had more time, I would reject more things, and bring other ideas or concepts in”. Taking the time to reframe his artistic process rhythms and to add a new sense of proportion to his work may just be the chance for him to explore new ideas as deeply as he feels fit in order to achieve a more grounded sense of professional gratification.

When you do six shows a year, there’s not enough time for the whole process. Technically, yes — the people who make the samples, do the stitching, they can do it. But you have no incubation time for ideas, and incubation time is very important. When you try an idea, you look at it and think, “Hmm, let’s put it away for a week and think about it later”. But that’s never possible when you have only one team working on all the collections.
–Raf Simons

I am definitely curious to see who will take over Raf Simons’s legacy and how they will give their own interpretation to Monsieur Dior’s original philosophy. At the same time, I look forward to seeing more of Raf Simons’s work, especially within his own brand where he is allowed complete creative freedom and has no one to measure himself against but himself.